Reflexology is more than just a massage, its a form massage therapy. It’s believed by our ancient ancestors that different parts of our body can trigger and relieve pain. Its used as a form of massage therapy based on a system of reflex points that effect a physical change throughout the body. It can reduce stress, headaches, digestive disorders, arthritis, insomnia, hormonal imbalance, menstrual disorders and digestive problems

The History behind Reflexology

The earliest reference of reflexology can be traced back on paintings left by ancient Egyptians back in 2400 BC. All paintings showcasing this therapy demonstrate ways to achieve better health through reflexology. When they found Ankmahor’s tomb they also found a series of hieroglyphs depicting reflexology and other trades. 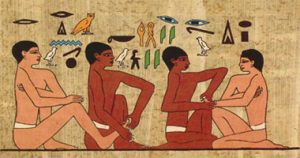 In one of the hieroglyphs the following text was written that displayed reflexology:

The second earliest reference comes back from ancient China. The Chinese believed our body had trigger points that relieved pain. They believed reflexology helped assist with balancing the yin and the yang in order to achieve health and vitality.

In the late 1800’s Sir Henry Head discovered that relationships exist between the skin and internal organs. In such cases proved that internal problems could be reflected to the outer body. Years later William FitzGerald took these finding and wrote about his study: 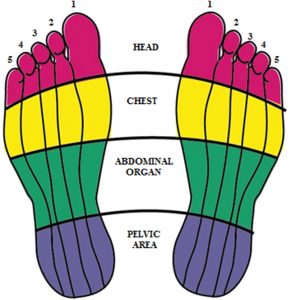 “Six years ago I accidentally discovered that pressure with a cotton tipped probe on the muco-cutinous margin (where the skin joins the mucous membrane) of the nose gave an anaesthetic result as though a cocaine solution had been applied. I further found that there were many spots in the nose, mouth, throat and on both surfaces of the tongue, which, when pressed firmly, deadened definite areas of sensation. Also, that pressure exerted over any bony eminence of the hands, feet or over the joints, produces the same characteristic results in pain relief. I found also that when pain was relieved, the condition that produced the pain was most generally relieved. This led to my ‘mapping out’ these various areas and their associated connections and also to noting the conditions influenced through them. This science I have named ‘Zone Therapy’”.

The work of FitzGerald proved how reflexology was and effective form of massage therapy that is now used world wide.

If you would like to experience a reflexology massage and reap its benefits please book online or contact us today!

The History of Massage Therapy

Massage Works has been recognized as one of the most outstanding locations in Fort Wayne to provide restorative treatments. Offering an extensive menu of body treatments, massage & chiropractic and salon services to allow for an indulgent escape from life’s daily demands. As life begins to change so does our body making health & wellness a leading priority. Therapeutic massage helps target specific muscle groups in order to optimize your health. Simply make an appointment and leave it to our professional staff at Massage Works to create an atmosphere for you to relax, rejuvenate, energize, and cleanse.